The Sopranos Wiki
Register
Don't have an account?
Sign In
Advertisement
in: Females, Soprano family, Characters,
and 3 more

"…I provide for my children.
Yes, Tony. You do. But I don't know how you do it, because you won't tell me. Well, let me tell you something, or you can watch the fucking news…everything comes to an end."
―Carmela Soprano[src]

The Many Saints of Newark

Carmela DeAngelis was born in 1960. Little was known about her early life, other than she met Anthony Soprano Senior and began dating him, likely during high school. While in high school, Carmela wore a letterwoman's jacket, which suggests that she had been involved in sports. As Tony lettered in football, it may have been something in common that brought the pair together. Tony eventually married Carmela.

Throughout the show's run, Carmela is shown to be a loving mother and supportive wife. However, she is well aware of Tony's position in the Mafia, and while it is rarely talked about openly, Carmela knows where Tony's income really comes from. While she accepts it for what it is, there have been times she struggles with it emotionally and spiritually.

Carmela also is aware that Tony has had extra-marital affairs and while condemning those affairs, she still stays with Tony. Tony's wealth, while coming from illegal gains, provides the kind of lifestyle that Carmela wanted for her and her children. However, it is a burden on her, as she admits on several occasions.

Carmela's relationship with her children is one of the typical American mother/children relationships. Carmela has confrontations with both Meadow and A.J. over issues that many families deal with. Carmela and Meadow have shared a tense relationship with issues concerning Meadow's developing independence and maturing into a grown woman. A.J. also has had some minor conflicts with his mother. Despite the occasional rocky moments she's had with her two children, Carmela always was loving and supportive of Meadow and A.J.

Tony and Carmela's marriage was a complicated one, but while they had their share of fights, there were also tender moments between them. Tony would at times buy expensive gifts for Carmela, but this is shown to be Tony's usual way of keeping Carmela happy at home while he carries on with his affairs outside of the home.

Tony's affairs and the impact they have on his and Carmela's marriage comes to a head in 2003. Tony slept with his ex-girlfriend Irina's cousin Svetlana, and when Irina learns of this, she becomes furious. She calls Tony's home, A.J. answers and she asks to speak to Carmela where she reveals Tony's infidelity not only with herself but also with Svetlana. Carmela initially calls her a liar, but is soon convinced of Irina's sincerity that it is the truth.

Carmela has a dramatic confrontation with Tony when he arrives home and asks him to leave. Everything is laid out on the table, including Carmela's mutual infatuation with Furio Giunta. Carmela and Furio fell in love with each other, but were never physically intimate.

Tony soon leaves the house and begins living separately. It is during this time that Carmela begins a brief relationship with A.J.'s guidance counselor Robert Wegler, and while their relationship is at first passionate, it quickly deteriorates when Wegler accuses Carmela of using him to sharpen her son's college prospects. Tony never discovers that Carmela had been sleeping with Wegler. She confesses this to Monsignor Philip, who reprimands her for adultery. While Father Phil does not condone Tony's past affairs, he makes it clear that two wrongs do not make a right, and asks that Carmela do penance by doing something nice for Tony. Some time later, Tony moves back in with Carmela.

After this, Carmela and Tony's life seems to go back to normal until Tony is nearly killed by Corrado Soprano, Jr.. It is at this point that Carmela's love for Tony is visibly expressed. She watches over him constantly while he is in the hospital and despite all of the negative things that she and Tony have been through together, she takes care of him and loves him despite all of that.

After Tony pulls out of the coma and begins to convalesce, Carmela continues to care for him and help him through his recovery process. Her devotion to him even makes a surprising, if temporary, change in Tony: during a meeting with the attractive real estate agent Julianna Skiff at her apartment, Tony has an opportunity to sleep with her, but opts not to and walks away, something he would not have done in prior years. However, Tony is soon back to cheating on Carmela again.

In the episode Chasing It, Tony becomes quite agitated about his money problems between his gambling and his debt to Hesh, and acts downright vicious towards Carmela for not investing her Spec House money to a match bet, leaving Carmela shaken. Later, Tony apologizes and starts investing the spec house. While this seemed to be a way to mend fences with his wife, in actuality Tony had been nervous about Carmela's constant questioning about the disappearance of Adriana La Cerva and how Liz La Cerva had become a slovenly, broken woman. 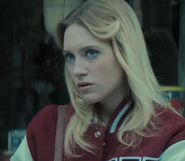 Carmela in the 1970's.
Community content is available under CC-BY-SA unless otherwise noted.
Advertisement